Good news, everyone,
It’s been a busy week: in addition to everything else that’s currently going on, I’ve been finishing Daxhotel’s search feature. 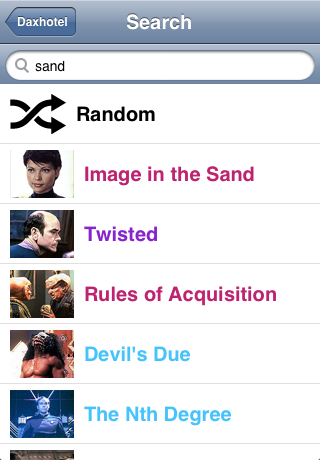 Currently, it’s not a full-text search but rather a very complicated LIKE statement. The downside of this is of course: searching finds partial matches (for example a search for “and” finds “hands”, too) and it’s not possible to search for multiple words at a time (searching for “dax hotel” will only yield results where this sequence of words appears in this exact order - in this example none). The upside of this is: it’s not required to build up a search index on first launch. I think searching works reasonably well this way. If there are any complaints, I’ll look into a full-text search (if it were natively possible to run full-text search queries with SQLite, I’d probably have chosen this option.

I’m not yet ready to have it submitted to Apple. This is for two reasons. First: I need some more, thorough testing.

Secondly and more importantly: as you may have noticed, all non-CBS/Paramound-approved Star Trek apps have recently vanished off the App Store. This did not pass me. Quite the opposite in fact: I too got a very frightening E-Mail from Apple which forwarded a communication from CBS demanding the removal of my app as well as two others. I responded to the CBS representative directly saying that:

The response came quickly and said: “We’ll look into it”. This was roughly two months ago and I haven’t heard from them since. I did not take down my App because I had clearly stated in my response that I would not fight them and if they really wanted, they’d get their way. One other developer who was notified was Matthias Schorer, developer of the Tricorder TR-580 app. He too enquired about the reason for the cease-and-desist note but received no answer so he sent a second E-Mail saying he’d re-push his app to the App Store if he didn’t hear back within a certain amount of time. They never responded but when Matthias wanted to push the new version he’d created to the App Store, Apple would not approve it, instead referring to the pending legal issue. I’m worried that Daxhotel might meet the same fate so I’m a bit hesitant. On the other hand: a lot of people have been asking for a search feature and should I really have to pull Daxhotel, the least I can give them as a giveaway gift is this.

got a new iphone since my old one blew a fuse with the 4.0 beta i was running. so i no longer have my favorite app. any chance i could get provision again? i think i still have the app in my itunes app folder but the provisioning is gone

Recently my computer blew out my iPod. I had to reload everything. When I reloaded Daxhotel, then went to open it. I found nothing inside. I hit the button that came up to reload the content of app. I still got nothing. I loved this app. Since it not able to work any more, what do I do with it?

Same boat here, I love the app, first one I got for my iPhone. had to do a restore to factory on it and now DaxHotel is gone. Crap!

I loved this app! I still have it, but it doesnt work. Is there anything I can do to activate it again?